Some Common Misconceptions about Pederasty in Ancient Greece 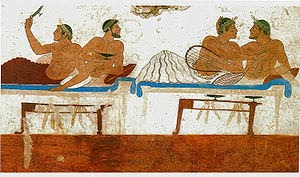 Pederasty, or the ancient practice of mentoring, was a social institute similar to modern day networking with religious and military implications that originated in Crete. This practice had nothing to do with the sexual orientation of the men involved. The mentor and his youth were more likely to be straight than homosexual, but since this was a social practice every male citizen (BTW that is redundant) participated regardless of orientation.

Sexual interactions between the older erastes (mentor) and eromenos (youth/future citizen) occurred in Crete and Athens primarily, although it varied from city-state to city-state. The only acceptable form of sexual activity between the two men was intercrural in nature. The term erastes means lover, eromenos means beloved.

What is intercrural? Intercrural refers to the older man placing his penis between the youth's thighs. This is literal and not an euphemism. Sexual activity was regulated by the class distinctions between the individuals. Penetration was for women and slaves, not men. And most definitely not social equals or even future citizens. In fact, penetration of a free man was considered to be a form of hubris, the ultimate sin.

The beardless youth was courted by one or more prospective mentors. The young man (mid-teens) was expected to chose the most noble man. However once he became a man, and developed a beard and body hair, he was expected to marry and produce heirs. The mentor was to remain supportive of his protege.

Even in Athens, the city-state were pederasty was most strongly tied to sexual behavior, the relationship was only intended to last for a few years. Sometimes a youth became a kept boy, but he did so at the risk of losing his citizenship and all the associated rights, especially the right to vote.

The Spartans practiced pederasty strictly for its religious and military aspects. The mentor was given the place of foster father. At least since the time of their greatest lawgiver Lycurgus, any sexual relations between the men required they either commit suicide or go into exile to redeem the affront to Sparta's honor (Aelian).

The Sacred Band of Thebes (378-338 BC) was made up of 150 pairs of male lovers. The rational being that "a band cemented by friendship grounded upon love, is never to be broken, and invincible; since all, ashamed to be base in the sight of their beloved (eromenos), willingly rush into danger for the relief of one another." Three hundred warriors were chosen and then grouped into pairs with an older man (erastes - lover) sworn to a younger man (eromenos - beloved). This group of warriors so impressed Philip of Macedonia, that even after their final defeat he said, "Perish any man who suspects that these men either did or suffered any thing that was base."

As you can see, the practice of pederasty varied significantly in the ancient world and making broad generalizations about it is impossible.
Posted by Kayla Jameth at 11:10 PM