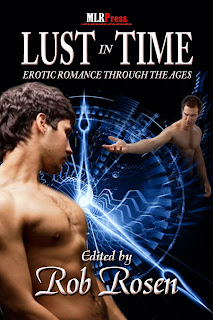 My latest Alexios/Galen short story, 496 BC, will be appearing in MLR Press' anthology Lust in Time. The ebook version will be available February 22nd. The dead tree book comes out on March 2nd.


The story takes place on the Attic coast after Alexios and Galen set sail with King Lykos on his way to deliver Cyrus to Delphi. The title is actually the year the events take place. I had the series set roughly during that decade, but the naming of the stories in the anthology required an actual date. So I buckled down and did some research on the Persian War, structures present at Delphi during that era, and what city-states were overrun by the Persians at different times. There is a little slop (pool term) in there, but that is the closest I can come to an actual date that gets me every thing I need in this story and the series in general.


But the most important aspect of this story is it gives us our first look inside Galen's heart and mind, exploring his feelings for Alexios, his new status as a recently freed slave, and his antipathy toward his lover's mentor. As well as giving a better view of slavery, class status, and the homocentric nature of portions of the ancient Greek world.
Posted by Kayla Jameth at 7:38 AM No comments: