Spartan Myths - All Slaves Are Alike 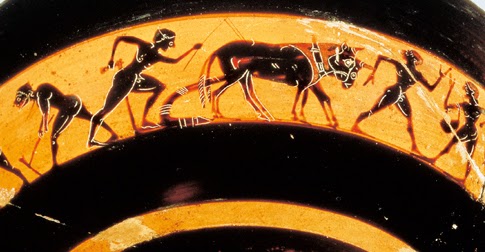 That is mostly true in the ancient world. As Lisa Henry pointed out, Roman slaves were chattel. Meaning they were property, an item to be owned, not quite human any more.

Things in Sparta were a bit different. Did I hear someone sigh and mutter, "Of course"?

I did warn you, even the other Greeks thought the Spartans were weird. But don't say it to their faces. The biggest badasses on the block can be as weird as they want to be.

So Spartan slaves. They more or less were owned by the polis (city-state) of Sparta and were comprised of the previous landowners. When the Dorian tribe that later became known as the Spartans invaded Lacedaemonia, they enslaved the previous inhabitants.

This new class of slaves, called helots, was unprecedented in the rest of the world. First they couldn't be bought or sold at the whim of their "master" because they didn't really have a master. Helots belonged collectively to the state not unlike mediaeval serfs.

Most were assigned to a plot of land (klēros). They were expected to give a set portion of the bounty of their fields to the Spartiate (Spartan citizen, i.e. adult male) the land was allotted to. Almost as if the land provided everything the Spartan needed, including the wherewithal to tend itself.

As long as their quotas were met, they were given an amazing amount of leeway in their lives.

Secondly, Helots were allowed to marry as they chose and raised their children with little to no fear they could be sold at any time, unlike chattel slaves. Some of the agrarian helots found themselves performing more traditional roles in Spartiate households. But even there they were not subject to some of the harsher realities of slavery.

But it wasn't all sunshine and roses.

One of the few things the Spartans worried about was a helot revolt. Helots vastly outnumbered the dwindling Spartan population. So in an effort to keep the helots subdued and "cut off the head of the snake", every autumn, the ephors declared war on the helots. This meant that a Spartan could kill any helot without risk of bloodguilt/ritual pollution.

This usually translated into some of the more promising young warriors in training being sent into the countryside with just a knife and the clothing on their back. The youths (18-19 years old) known as kryptes were expected to use stealth to steal what they needed to survive, spy on the helots and stalk their prey.

Any helot caught outside after dark was killed, as were any helots who were respected enough to be considered possible leaders for a revolt. The young men also targeted the best and the strongest as a way to show off their training.

Through terrorization, some but not all revolts were kept in check.

So the helots had in some ways the best life a slave could hope for in the ancient world, but it came at an equally terrible price.
Posted by Kayla Jameth at 9:21 PM 3 comments: