Lexicon for A Tested Love: A-D

Acrocorinth—"Upper Corinth" is the acropolis of Corinth. Helios and Poseidon vied for the patronage of Corinth. Briareus ruled that the Gulf of Corinth belonged to Poseidon and the Acrocorinth to Helios.

Acropolis (plural: acropleis)—means "upper city" and was situated atop a defensible hill. Often the original core of a city, the acropolis housed the temples and palaces of the polis.

Adonis—a prince of Kypros. A young man of unsurpassed beauty, he was beloved of Persephone, Aphrodite, and Apollo. He was killed by a wild boar. Some versions of the story say Ares, in a fit of jealousy, transformed himself into a boar and slew Aphrodite's lover. Others credit Artemis with sending the boar as revenge for Aphrodite causing the death of Hippolyta. Aphrodite turned his blood into the anemone.

Aegis—Zeus made his "thunder-shield" from the skin of the she-goat who nursed him as an infant. The word aigis means both goat-skin and stormy weather. Nothing could be more appropriate for the god of thunder.

Aesop—a fabulist, a story teller specializing in fables. He was born in the 6th century BC and was known as an extremely ugly slave. At some point he earned his freedom. King Croesus of Lydia sent him on a diplomatic mission to Delphi. He insulted the Delphians in some fashion and they repaid him sentencing him to death for a spurious claim of temple theft. He was thrown from a cliff. The gods punished the Delphians by sending a miasma which caused pestilence and famine.

Agōgē—the Spartans’ rigorous education and training program. A fierce and sometimes deadly training all Spartan males underwent from the time of their seventh birthday until they entered the standing army at age twenty. Both girls and boys took part in similar groups; although, military training was not part of the girls’ educations. Both genders took part in dancing, singing, oratory and athletic competitions. In addition, the boys learned stealth, hunting, military training and loyalty to their agélai, syssitia and Sparta.
· At age seven, boys were taken from their mother’s home and given to a paidonómos or boy-herder to supervise. The group known as an agélai, or herd, would take the place of their families. They were all “brothers.”
· When they turned twelve, each boy would be given only one item of clothing a year, the phoinikis, a scarlet cloak. Anything else they might need they were expected to steal. However, any boy caught stealing was punished by flogging. They were barely fed enough, to teach them how to deal with hunger on campaign and to encourage theft.
· Some boys were given an additional honor at eighteen by being chosen for the Krypteia. These warriors, the kryptes, were the elite of their agélai and destined to be officers in the army.
· At age twenty, the boys joined the reserves. They would now be members of the Spartan army until they retired at age sixty.
· Boys who failed at any point did not become Spartiates/Spartan citizens.

Agora—"gathering place" or "assembly", was the central place for athletic, artistic, spiritual, and political life of the Greek city-state. During early times, freemen gathered here for military duty or to hear the decrees of the ruling kings or council. Later, the agora became a market place as well. The Roman equivalent word is forum.

Amphora (plural: amphorae)—a vase-shaped ceramic container with two handles on either side of a long narrow neck. Most taper to a pointed base to allow them to be stored upright by embedding them in sand or soft ground. In kitchens and shops, racks held the amphorae.

Amykles—a village south and west of the original four unwalled villages making up the polis of Sparta. While not one of the originals, it was later added. The village contained the sacred precinct of Apollo Hayakinthios and the tomb of the Spartan Prince Hyacinthus, one of Apollo’s lovers.

Andron— dining room for the men. A small hearth in the corner is the family hearth/altar to Hestia. Once it would have been the fire that meals were cooked upon, now it is the symbol of the family's domestic worship. Offerings of meat and drink are made to Hestia at every meal.

Anemoi—the winds. Sometimes represented by gusts of wind, winged men, or even horses. Each was associated with one of the cardinal directions and a season. In their equine form, they drew Zeus' chariot and fathered immortal steeds. The Spartans were said to sacrifice a horse to the winds on Mount Taygetos.

Apollo Hayakinthios—a deity only worshipped in Sparta. The deity Hyakinthos predated the arrival of Apollo and was subsequently subsumed into the Greek deity. The epithet Hayakinthios partially refers to the previous deity and also Prince Hyacinthus.
· It was not uncommon for the invading Greek deities to take on aspects of a previous deity and even use the fallen deity’s name as an epithet. These combined gods were local and considered to be merely aspects of the primary god.
· The story of Prince Hyacinthus’ death is possibly the ritualization of human sacrifice.

Apophorá—the portion of a helot's harvest that is owed to his Spartiate, ranging from half of everything his klēros produced to a set amount. The portion probably varied over the centuries.

Apotropaic magic, or warding magic—the use of gestures, phrases, or amulets to ward off some unpleasant event, or more specifically in the case of the Greeks, the evil eye. Most people have seen the eyes painted on the prow of the ancient Greek triremes. This is a form of apotropaic magic designed to ward off disaster.

Apothetae or “deposits”—deformed or imperfect babies that were exposed soon after birth. Exposure of infants was not uncommon in the ancient world. Oedipus is a famous example.

Archon—ruler or lord. The title could refer to anything from the ruler to a public official to "master of the tables" in a syssitia.

Argos—an ancient Mycenaean settlement on the Argolid plain. The inhabitants, Argives, were Sparta's rivals for control of the Peloponnesus.

Artemis Orthia—another instance of a Greek deity taking on aspects of a previous deity. Orthia refers to a wooden idol found by the Spartans. The older goddess required human sacrifices. When she was subsumed as an aspect of Artemis, her bloodthirsty nature changed. Artemis is considered the protector of children in Sparta, primarily girls, but boys also benefited from her protection.
· The sanctuary of Artemis Orthia became a place where the young warriors were tried and tested. Every youth was flogged until they bled, offering their blood in a less fatal fashion. It became such a spectacle that an amphitheater was erected for spectators to watch.

Atê—the goddess of mischief, delusion, ruin, and folly. She often led men to their ruin. At Hera’s instigation, Atê has even tricked Zeus. 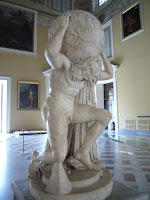 Atlas—the Titan who bore the heavens on his shoulders. He taught farmers and sailors astronomy and caused the heavens to turn. Perseus turned him into the Atlas Mountain with Medusa’s head.

Aura—one of the nymphs of breezes.

Aulos (plural: auloi)—a reed pipe played as accompaniment to poetry, athletic competitions, to keep the rowers on triremes in pace, at sacrifices and dramas. The aulos is the symbol of the muse Euterpe.

Black soup—Spartan staple was made up of boiled pig’s blood, vinegar and salt. The Spartan army mainly ate this concoction. A man from Sybaris, a city infamous for luxury and gluttony, ate the soup and said, “Now I know why the Spartans do not fear death.”

Brazier—an upright metal bowl or box for holding fire or coals. They were used for lighting, heating, and cooking.

Caeadas Chasm—a chasm in the Taygetos mountain range where criminals, traitors, and captives were cast into. Modern archeology has found the remains of adults in the chasm, confirming its use for capital punishment.

Cerberus—the three-headed dog that guards the gates to the Underworld.

Chattel—belonging or possession. Chattel slaves were not people, they were items.

Chiton—a form of clothing worn by men and women in Ancient Greece. Also known as the tunica. The Doric chiton was simple, without sleeves. The cloth was pinned at the shoulders by fibulae for women and only over the left shoulder if the man was doing something strenuous. The fabric was gathered at the waist by a zone for women, zoster for men, also known as a girdle. The women’s chiton fell to the floor, the men’s to just under their knees. Male slaves wore a much briefer garment.

Cyclops—three one-eyed giants who forged Zeus' lightning bolts, Hade's helm of invisibility, and Poseidon's ground-shaking trident in thanks for Zeus' freeing them from Tartaros.
· A lawless band of primitive cannibals Odysseus encountered on the isle of Hypereia. To save his men, Odysseus blinded Polyphemus, the son of Poseidon and earned the god's hatred.

Demeter—the goddess of agriculture, grain, and the harvest and mother of Hade's wife Persephone.

Diamastigosis—a ritual flogging of the youths of Sparta held in Artemis Orthia's honor. The Orthia was a wooden statue the Spartans discovered when they invaded Lacedaemonia. The idol inspired madness and blood lust. To propitiate the goddess, men were chosen by lot to be sacrificed on her altar. Later, Lycurgus decreed that all Spartan youths be scourged and thus their blood stained the altar. 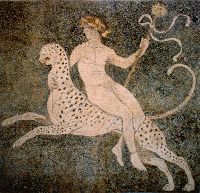 Dionysus—the god of wine, parties, and drunkenness. He was often portrayed as an effeminate young man. He dwelt in Delphi during the winter months when Apollo journeys to Hyperborea.

Dryad (plural: Dryades)—nymphs of the trees, woods, mountain forests, and sacred groves. Some were associated with certain trees; others were bound to them, dying when their tree died. Ancient Greek forests were primarily found high in the mountains as most of the lowland forests had been cleared for agriculture. Therefore, the Greeks thought of the Dryades as mountain-dwelling nymphs.
Posted by Kayla Jameth at 1:46 PM No comments: