Great to have you here, Douglas. I see you've brought a lovely cover and a sexy excerpt.

Thanks for having me over to your blog. I’m here today to talk about bucket lists. I know, I know, this is a bit of a departure from your more usual historical posts (all of which I love reading!) but bear with me while I rant because I have a little proposition for you and all the lovely visitors to your blog! Exciting, huh? 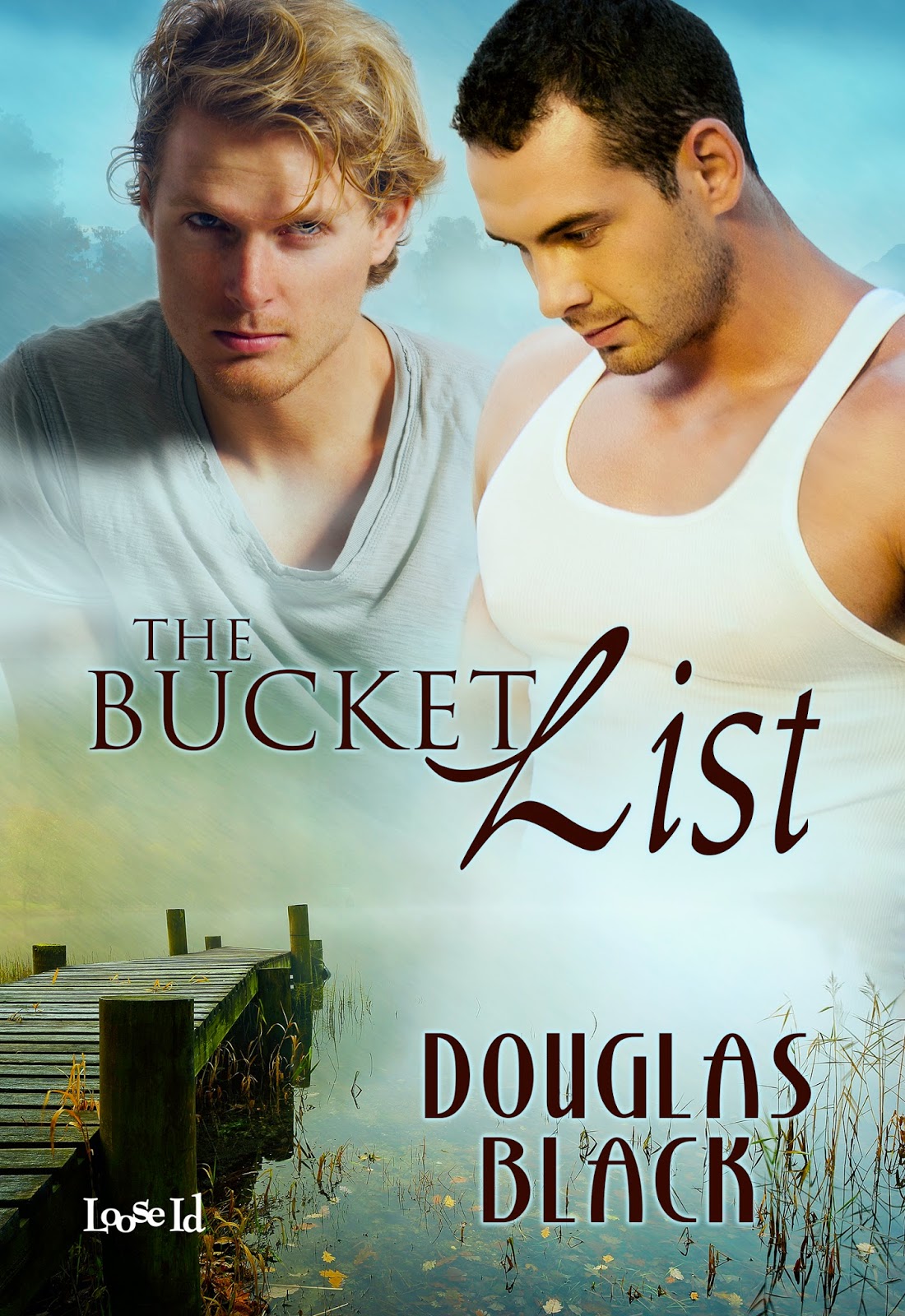 The concept of bucket lists was the inspiration behind my latest novella, imaginatively titled (I’m sure you’ll agree) The Bucket List. In the story, main character Kade gets dumped and his friends write him a bucket list to help him break out of his shell and start having fun again. Kade is a reluctant participant in this challenge, but participate he does and it changes his world more than he ever thought it could.

I would imagine the concept of bucket lists needs no introduction, but for those of you who have come this far in life living under a rock, let me briefly explain anyway.

When you write a bucket list, you write down all the places you want to go and all the things you want to see, do and achieve before you shuffle off this mortal coil. In doing this, inevitably you realize just how much there is out there to do and how little time there might be to do it all in, but that’s part of the fun! That’s the challenge of bucket lists and, I suppose, of life in general.

They say that writing a bucket list focuses your attention on what you want to achieve in life and, from personal experience, I can say that’s true. We all know that it can be far too easy to get bogged down in life’s little details and end up forgetting the bigger picture, and it’s also far too easy and oftentimes far more comfortable just to stick to what we know instead of seeking out new experiences.

I’m sure I’m not the only person ever to find myself standing on New Year’s Eve with a drink in my hand, wondering where on earth the year went and what I did with it. In fact, that’s happened to me more than once, usually when I’ve had a very busy year work-wise, and it’s not a nice feeling. It makes you wonder what you’re doing with your life, where you’re going wrong and what you’re going to do about it. And those are not the questions a person should be trying to answer five minutes before midnight on the last night of an old year.

I was still a student at university when I wrote my first bucket list. I wrote it to remind myself that there was more to life than just studying. Over the years, I’ve returned to it, rewriting it or retyping it whenever I’ve felt that I’m losing sight of all the things I want to achieve and, you know something? The years where I’ve paid extra special attention to my bucket list have never ended with me looking back and wondering where all the days have gone, as the chords of Auld Lang Syne start to ring out. Sure, I’m still aware of time passing by, far too quickly for my liking, but at least more often than not it feels like I’m managing to cling on for the ride.

You can probably guess what my proposition is. I challenge you, each and every one of you, to take a pen and a scrap of paper and have a go at writing your own bucket list. Unlike Kade in my new novella, I can’t promise that it will turn your world completely upside down, introduce you to the sort of Australian surfer-guy that dreams are made of, and generally set you up on a path that might lead to a hot, exciting new life, BUT, I can promise that it will make you think.

Take an hour. Go to a coffee shop. Order your favourite drink and arrange some sheets of paper in front of you. First things first, do what all good writers do and spend the next twenty minutes staring out of the window, procrastinating. Then, start writing. List down all the places you want to see, even if you have no idea how you’ll ever be able to afford to travel there. Write down all the things you want to do and learn and own and achieve. I promise you, you won’t regret it. If you’re anything like me you’ll realize that there’s a lot more that you want to do than you expected there to be, and you’ll also see that if you make a few changes you can begin to understand how it might just be possible to start ticking a few things off that list. Take my word for it: that’s an incredibly exciting place to find yourself in!

Oh, and if you’re in need of inspiration, might I suggest you could do worse than to have a little glance at The Bucket List?

The Bucket List was released by Loose Id Publishing in August 2014. It is also available from Amazon.

Blurb:
When Kade Doherty gets dumped, he expects sympathy from his friends. Instead, he gets a bucket list. His friends want to help him enjoy life again, but Kade isn’t convinced a list of outlandish leisure pursuits will help much with that. To keep the peace he goes along with the plan and in the process, he meets Blake.

Blake’s Australian accent and surfer-boy looks are the stuff of sexual fantasies and Kade surprises everyone – including himself – when he wastes no time making a move.

Kade goes with Blake into the Scottish highlands, but just as he is beginning to get used to life with his very own Mr. Australia, reality comes knocking. Kade’s newfound happiness falls apart when his abusive ex demands they meet. Blake senses something is wrong and he wants to help, but Kade knows he can’t confide in Blake.

After all, Kade hasn’t exactly been honest. He might feel like a different man when he’s with Blake, but Kade knows he’s still just an accountant from Glasgow with slight obsessive compulsions and a bucket list that someone else wrote. He knows Blake won’t hang around, let alone help, when he finds out the truth.

Excerpt:
Kade made his way slowly over to Blake, keeping close to the relative calm of the curving bar. He stepped in beside his Mr. Australia. Blake didn’t turn to look at him.

Kade assumed that, even given the circumstances, it was still acceptable to start with, “Hello.”

Blake turned his head, and Kade felt that warmth he had felt with his back to the fish tanks in the Asian supermarket. “Hi,” Blake said, his voice deep enough to carry against the music.

He turned, opening up his body and inviting Kade to step closer. Kade did. He wanted to, wanted to see if that strange connection he had felt earlier was still there between them.

“Not a good kisser?”

Blake looked Kade up and down, taking his time doing so. Kade had always thought the idea that someone could undress you with their eyes was a concept fit only for the cheap romance novels his mum used to read, but he couldn’t think of a better way to describe what Blake’s eyes had just done to him. The words needed to describe how that made Kade feel wouldn’t be fit for polite company. Not that Kade was really in polite company.

“I wouldn’t know. Didn’t want to kiss him.” Blake reached out and stroked his hand down Kade’s right arm, from his shoulder to his wrist. He left it there for a few moments, holding tight, and then he pulled Kade’s wrist toward him. Kade’s hand landed on Blake’s hip, his thumb teasing Blake’s tight, strong stomach muscles. When Blake let go, Kade didn’t move his hand away.

“Why didn’t you want to?” Kade couldn’t stop staring into those bright blue eyes.

Blake shrugged and wrapped the hand that had been around Kade’s wrist around Kade’s neck. “He’s not my type. And I was hoping I would meet someone else here tonight. I thought it was a long shot, but I didn’t want to take the risk and ruin my chances.”

Despite his recent drink, Kade’s throat felt dry. He didn’t even care if that was a lie. Blake’s strong fingers rubbed Kade’s neck just below his hairline.

“Who were you hoping to meet?” Kade asked.

Blake tugged him in close so their bodies were pressing together. Kade’s hand slipped around to Blake’s back, holding on tight as Blake put his lips to the side of Kade’s neck.

“You,” Blake whispered. They were so close to the loudspeakers that the word should have been lost, but Kade heard that loaded syllable and felt it translate like heat through his body, like he had just stepped into a hot bath.

“Are you here with somebody?”

Kade shook his head. He felt Blake spread his legs. There was barely any distance left between them.

“Then would you mind if I did this?”

Kade turned his head to find Blake’s lips less than an inch away from his own. He smiled and tried for one of those winks he was so not used to giving, and then let Blake close the distance between them.

Author Biography:
Douglas Black was born and raised in bonnie Scotland. An archaeologist by trade, Douglas started writing MM erotica - as a means of avoiding starvation at university - before returning to the genre in 2012.

Welcome to your fantasy.