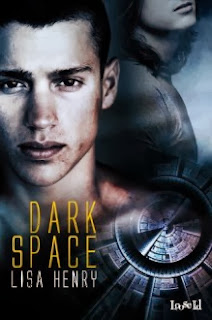 Dark Space is a well written m/m science fiction novel. And I should know; I have spent most of my life reading the scifi and fantasy stories of greats like CJ Cherryh, Patricia McKillip, Jo Clayton, Andre Norton, and Steven Brust, just to name a few.

Therefore, I have certain expectations of both scifi and fantasy stories and I don't mean "I set it in the future/alternate reality/fantasy so it will be ok for two men to be together." That happens way more often than I like. (Pet peeve)

If you are going to use a setting like that, you must invest the time into world building. Logic bombs drive me crazy and if they are big enough, I can't finish the story. Things have got to make sense. You can't do something just so your story works without giving it a basis in your world.

Fortunately, Lisa Henry doesn't do that to me. Her story is a true scifi. It has world building, history, and get this—it's not ok for two men to be together just because we are enlightened in the future. It will still get your ass beat down on this military instillation in space. It's not a free ticket. Brady and Cameron still face all the difficulties present in the modern military.

Plus they face a greater adversity, a threat to all mankind—the Faceless, an unbeatable alien race that has it in for humanity.

Brady is a young recruit just trying to get through the last seven years of his ten year enlistment so he can go home to care for his sick father and baby sister. Time can't go fast enough for him.

Cameron was last seen when the Faceless captured the shuttle he was piloting four years ago.

When a strange insect-like pod arrives at the space station, Brady is called on to ease Cameron's reintroduction to the fold since they are from the same neck of the woods back home. After all the pilot has been through, everyone wonders if the former hero is actually a traitor.

These young men face danger in the form of homophobia from the other soldiers, hostility from all quarters, and the coming of one of the Faceless' generals.

The writing is intense and the world building sublime. If you haven't read Dark Space, you should. I also strongly recommend The Island.
Posted by Kayla Jameth at 10:03 PM