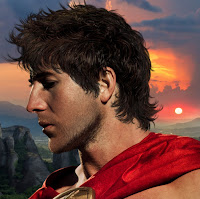 Today's snippet is from A Shared Love, the final book in the Spartan Love arc of Apollo's Men. It's a lot longer than six sentences, but I think I can be forgiven for not being able to cut it shorter.

But Theron wasn't ready to be absolved. "Then they wanted me to kill Andreas! And I nearly did. I went to his home intending to take his life with my own hands." He had to stop and swallow a few times. "I felt trapped and angry...and more scared than I have ever been."

Coridan held his peace, a haunted look in his eyes. Theron didn't know what he would have done if Coridan had offered some meaningless platitude. Allowing Theron to continue, "I didn't eat or sleep in the days it took me to travel from the Karneia. I started at the top of the list and slew three men until I came to his name. All I could think was if not me then the ephors would just send someone else. Someone who might hurt him not just take his life.

"So I sat there on his bed with Ictis, waiting for him to come to me and die," he choked out, pausing to try and swallow down the mass of grief clogging his throat. Drawing a deep breath, he continued, "You can't imagine how that feels."

To find other Rainbow Snippets, stop by the group on Facebook.
Posted by Kayla Jameth at 10:57 AM 1 comment: