So I decided to write an Alexios/Galen short story. It is titled "496 BC" in accordance with the anthology guidelines, and takes place between the end of Alexios' Fate and the sequel.

496 BC gives us Galen's point of view, something we haven't seen previously. Along with insights into his life as a freed slave.

AB Gayle suggested that I rewrite it strictly from Galen's POV. I've given that a try and will take scenes from that version and put them into a dual POV piece. Then I'm going to ask my beta readers which one is better. So I'm not even sure which one I'm going with yet.

The single POV story is a hauntingly bittersweet love story. I don't know what the other version will be yet, but I think it will be a little more sweet. I'll have a better idea once I finish it.
Posted by Kayla Jameth at 1:17 PM 1 comment:

I've finished my content editing and have sent Cinder and his prince off to the proof reader and then the line editor. My boy is all grown up and no longer in my hands.

That is always the strange part for me. It's like the first time you put your child on the school bus and realize that someone else has a say in their life now. And after they are finished with him, I have to turn him loose in the big wide world where I hope everyone is nice to him.
Posted by Kayla Jameth at 2:24 PM No comments:

From the Ashes Cover 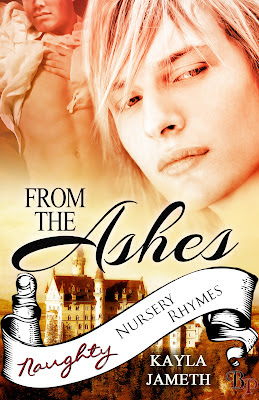 Mina Carter outdid herself on my new cover for From the Ashes. Henri is sexy, sensual. And Cinder? Cinder is exactly how I and his godmothers pictured him.

From the Ashes is a Cinderfella. A m/m Cinderella story. Cinder's grasping stepmother forced him into a dress when his father died a decade earlier. Since then he has been a servant in his father's house, known as Cinderella. But soon his stepmother will be unable to continue the charade. What will be his fate then?


Cinder never thought that he could rise from the ashes of his life, but an unexpected encounter with a woman claiming to be his fairy godmother may be just what he needs. Finding himself flung into his very own fairy tale, she sends him off to meet his Prince Charming. But was the gown really necessary?

Excerpt:
Cinder glanced around. Paper lanterns floated in the trees, lined the walks, and graced the gazebo near the reflecting pool, giving the grounds a mystical air. Their warm glow caught the dancing jets of the fountain splashing merrily to his right. The musical, crystalline tones carried on the night wind’s breath. He was reminded of the enchanted gardens in the fairy tales his father had read to him when he was a child. What would happen to him if he dared walk there?

Henri led him toward the gazebo. Soon he would find out.

The cool breeze caressed his uncovered neck. Cinder shivered at the ethereal touch. Henri turned to him, the question clear in his eyes, but he didn't know how to answer. Instead he breathed in the tangible scent of rich earth and flowing water, hoping to calm his bounding heart.

Henri lightly stroked his arm. Cinder’s breath caught at the silky brush of the other man’s fingers. He drew another shaky breath. Henri may have meant to soothe him, instead his touch set Cinder’s wayward body aflame.

They left the last of the courtiers behind as they entered the dim interior of the fanciful pavilion. Vines climbed its intricately carved posts, perfuming the air within. The music and voices of the aristocrats faded away. Only a single intrepid nightingale could be heard over the cheerful babbling of the fountain. Hidden from the rest of the court, an unworldly sense of peace filled him. Was his very own fairy tale about to come true?

Bespelled and bemused, he could feel the magic in every beat of his heart, in every trembling breath he drew.

Once inside the bower, Henri reached to cup Cinder's cheek. Unused to being touched, he nearly flinched away but managed to still, heart pounding, before giving himself away. The older man's thumb slid across his cheekbone and came to rest lightly on his mouth. Why did he want to lean into that caress?

The other man's warm, slightly musky scent filled his nostrils, drowning his senses.

Henri's other hand wrapped around his waist and drew him close while tipping his face upwards. Cinder's breath left him in a rush, stirring the noble’s hair. Henri was all that he could see, his mouth slowly, carefully descending toward Cinder’s. If he allowed this, the other man might discover his deception. He couldn’t risk that, so why then did he ache to feel Henri’s kiss? Their lips brushed, light as thistle down.

Surprisingly, Henri's mouth was soft and warm upon his own. After a moment, Henri's pressed more firmly against his. Something fluttered in his chest, trying to get out.

Cinder didn't think to pull away until he felt Henri's tongue seeking entrance. The hand on his face slipped to his nape and held firm. He froze in shock, not even daring to breathe, as flames rushed through his body. The very beat of his heart betrayed him.

The questing tongue stroked his lips and pushed between them. It slid over his teeth, seeking to enter. When he protested, Henri's tongue swept in and began a lazy, sensuous exploration that left him breathless.

Finally they separated slightly, Cinder panting heavily, trying to catch his breath. Was Henri as affected by their kiss as he was? A quick glance confirmed Cinder was not alone in his arousal. Flushed and gasping, Henri gazed at him with eyes full of wonder and something unnamed smoldering in their depths.

Posted by Kayla Jameth at 9:50 AM No comments: