Lori Toland Speaks About Her Journey to Genderfluidity 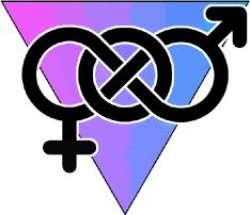 There, I’ve gotten the hardest part over with. Being gender fluid isn’t something I usually talk about, like the weather or what’s for dinner. It’s a part of me I’ve kept hidden away for many years and rarely discussed but I’ll do my best to tell you how I feel.

I’ve known I wanted to be a boy for my whole life. When I went to elementary school, it was a very strict private school so we had a dress code. I can remember the fights with my parents over wearing a skirt. I wanted to wear pants. I always looked forward to Friday, not because school was done but because I could wear shorts or pants.

I always felt like I had a missing body part, like something was off and I just couldn’t figure it out. But like being born a certain way, you just start to accept what you were born with. For most of my childhood, I kept trying to fit in but the girls shunned me and I couldn’t keep up with the boys in my dainty white dress shoes. So I didn’t have many friends growing up.

Honestly, my parents didn’t care if I climbed trees, played with GI Joes, or wanted to play sports. As long as I was safe and happy, they were fine. They treated me as their child, and didn’t try to force me into one gender. It was simpler when I was a child. The real problems came as I got older.

When I started my teen years, society started pushing me more toward conforming to a female gender role. Girls wore skirts and put on make-up and did their hair to attract boys. It all seemed rather fake and stupid to me. And I was too damn busy with working on my car and holding a job to try and be girlie just to pick-up a guy.

As much as guys said “I just want a nice girl who isn’t covered in make-up” they often don’t actually mean that. They want to ultra-feminine girl who makes them feel like a man, not a girl who has gender issues. But I hit a certain age and baggy t-shirts couldn’t hide my figure and I started attracting guys, often men much older than me.

I told a couple of guys I went out with how much I wanted to be a boy while growing up and while they didn’t shove me away, they often asked me why. To them, being a girl was the ultimate win. I didn’t have to hide I was turned on. I had sex on tap, to hear it from them, because guys were easy (Uh, no not really) to get in the sack. Most of all, guys did all the work, like being the breadwinner and the family problem solver. And they kept going on and on, women were emotional… blah blah blah.

But that was what I wanted. When they went through telling me about how awesome my life was as a girl, I would constantly think being a man was how I wanted my life to be. Wanting to be a man wasn’t about thinking men had it easier than women. Each gender has its drawbacks.

What was bad along with all of this was I felt comfortable as a woman too. I enjoyed my body. So confusion ensued and after several bad break-ups, I decided to swear off relationships and find my center. After five years, many of those spent building my business, I came to the conclusion: I liked being a woman. I also very much felt like I should have male genitalia. I enjoyed being the breadwinner in my household. When it came to sex, I wanted to top.

Gender and sexuality wasn’t as discussed back then so I would have to explain who I was, what I felt and how I fucked to anyone who came along, especially when I met my future husband. But I now I have two words to explain it all. Pansexual Gender-fluid.

It’s taken thirty-five years to get to that point. And I still reserve the right to change my mind if I so wish. This is my life. If I feel a different word better expresses how I feel in my own body, I will use it and be happy.

I’m here for anyone who has questions or just needs an ear. Thanks Kayla, for having me by!
Posted by Kayla Jameth at 9:26 PM