Review of The Best Ever by Deanna Wadsworth 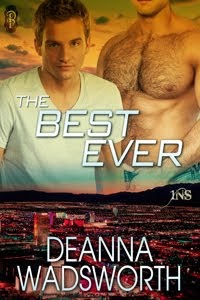 Jason has always been a geek, a red-headed geek at that. High school was just a bad memory that he's tried to forget. To temporarily escape a life that still isn't going his way, Jason attends a gaming convention to meet up with his online WoW friends, hoping to catch a glimpse of the star of the newest pitching game while he's there. And since what happens in Vegas stays in Vegas, he books an encounter through 1 Night Stand. He's tired of being unable to get a date and while this isn't love, it looks like a sure thing.

Blake is now a professional ball player, but once his dream of making the cut rested on improving his math grades with the help of his tutor Jason. When Jason walks up for an autograph, Blake is ecstatic and invites him to the spondsored party after the signing.

Jason shows up, but rapidly feels out of place surrounded by jocks. All the insecurities of his youth he had thought he'd left behind come roaring back and he heads for the door. But Blake catches him and they spend a couple hours enjoying each other's company. All too soon the hour of eleven approaches and they have to leave. Both men contemplate cancelling their encounter to continue reconnecting with a friend, but decide to meet up the next day instead.

Madame Eve's assistant Deanna Wadsworth brings together her third couple in this loosely linked series. As with the previous offerings, her characters are not just the standard geek/jock pairing. The characters have quirks that make them uniquely hers.

Even though this is a 1 Night Stand story, it is not about a one off. The sex is sweet and endearing. The men share a depth of caring not often seen in short works without resorting to instalove. Jason and Blake can now explore the feelings they had for one another, but were too young and inexperienced to deal with before.

I always enjoy Ms Wadsworth's sexy, quirky tales of finding love where you least expect it.